There was a documentary about the history, culture, greek community and archaeology of Alexandria in a Greek national TV channel this summer, which you can now find online here: http://webtv.ert.gr/ert3/27ion2017-beyo ... -mesogiou/

The documentary is in Greek, but has very nice visuals of the city, and particularly from the ongoing recent excavations at the Shalalat gardens, within the Ptolemaic Royal quarter, where Kalliopi Limneos-Papakosta uncovered a rare marble statue of "Alexander the Great with the Spear" and foundations of a huge public Ptolemaic building (extending beyond the currentexcavation site) with a rock-cut stoa (tunnel) which is being excavated/emptied this season, seen below! She also (re-)uncovered part of the L2 main road of Alexandria, which runs parallel to the main Kanopic Street, from the North. Se below The documentary has nice images of Alexander's statue and the excavation site, if you scroll through.

I hope you enjoy it!

Best wishes for Christmas and 2018!
Top

That is Alexander is proved by the two ribbons on the hair : According to the archaeologist Papakosta -Limnaeou ONLY Dionysos and Alexander bear two ribbons.

Let me also add that the face has sideburns facial hair which are known so well from the Pompei mural painting !
Πάντες άνθρωποι του ειδέναι ορέγονται φύσει
Top

Thanks for the link. The statue is only about a metre tall and here are a couple of screen shots.

Why am I thinking Gordon of Khartoum?

Thanks a lot for the screenshots Alexias.

The sideburns and the spear handle on the left hand are good arguments to tie this statue with Alexander & the work Alexander with the Spear by Lysipus. But I am still curious about few things:

a) The statue looks way too polished for its hellenistic age, unless it belonged to the late ptolemaic period. I am not at all an expert in sculpture, but I cant really memorize seing polished hellenistic statues in all the museums I ever visited.

b) If it is a copy of a work from Lysipus, the face representation of Alexander should be closer to what we have from the Roman sculptures. Still, at least the nose of Alexander is strikingly different from that of another finding attributed to Alexander, from the Tomb II in Vergina. Is this difference a reason to doubt the association of one of the two findings with Alexander or was it common to modify facial characteristics in sculptures? 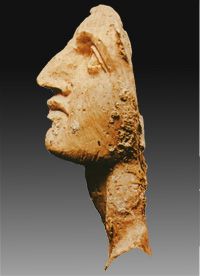 I don't know what date they've attributed to this statute, but the twist of the body would seem to show the realism of mid to late Hellenistic sculpture, yet the face is curiously bland. There doesn't seem to be any attempt to inject vitality into it. Does this indicate that it is a copy? You wouldn't immediately associate this with Alexander as it lacks many of the usual 'Alexander' characteristics - the furrowed brow, the deep-set eyes and the curved, parted lips, the long, peaked hair. As you say, gped, it also has a very standardised nose. The standard 'Alexander' characteristics may be clichés, but still, you'd expect a bit more character in this face if it is Alexander.
Top
Post Reply
5 posts • Page 1 of 1

Return to “Alexander the Great in the Media”