I have been reading The Twin Soul of Alexander by Lawrence M. Scheier (a truly dreadful novel to be avoided at all costs), but on the front is the Pella deer hunt mosaic.

Traditionally Alexander is said to be the figure on the right with the sword and Hephaestion on the left with the axe (a supposed reference to Hephaestus). However, the more I look at this, the more I think that the full-frontal portrait on the left is Alexander. Note the furrowed brow and the curved upper lip, with Peritas at his feet. Why would Hephaestion be shown full-face and Alexander only in profile? The figure on the right looks to be the taller of the two, and the face is more bland than that on the right. It also bears a resemblance to this reputed portrait of Hephaestion from the Sidon sarcophagus

For fun which do think is Alexander
Top

Ok, no idea why that picture disappeared 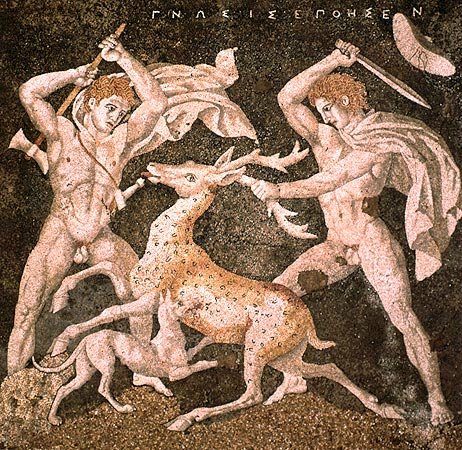 I voted for Alexander being a figure to the right, one with a sword. If those two are indeed Alexander and Hephaistion (some other names were suggested), my argument for Alexander to the right is because he is holding a deer by its horn. As a king (or a prince) he had the right to the first kill.

What?! Are you saying Alexander needed a divine helper to kill a deer? 'Hephaestion is the figure with the raised sword'

So I am not the only person to think that Hephaestion is on the right with the sword!
Top

Pella was the town of Cassander and massively enlarged during his reign. The Lion hunt mosaic may date to ca 305 BC. Any relation to Alexander or Hephaistion is purely fictitious. The initial question lacks alternative 3: i.e. none.

Very possibly. They may well represent generic figures, but despite Cassander, the kudos of having someone famous represented on your wall or floor would have been considerable. Your guests, or you, would have been able to 'yes, I/my father used to hunt with Alexander'. Alexander's image also greatly influenced art in the Hellenistic period. There are many images where it is difficult to tell whether it is Alexander, a god such as Apollo or Helios with Alexander's attributes, or someone else in the style of Alexander.
Top

These mosaics provided an illustration to my latest post on whether the ancient Persians used "sabres" or "scimitars" and whether they were distinctively Persian weapons https://bookandsword.com/2017/09/02/som ... was-right/ So thanks for the reminder about them!
My blog (Warning: may contain up to 95% non-Alexandrian content, rated shamelessly philobarbarian by 1 out of 1 Plutarchs)
Top

Here's my guess *if* this portrays both A and H:

The right figure looks younger than the left one, and the left figure has a larger physique, and really looks older (what of the furrowed brow and so on). So I think that, if Cassander did allow his townspeople to enjoy the company of those two very gallant hunters named A and H, then I have this idea that H really holds the double-ax and A has the deer horn on his hand.


my argument for Alexander to the right is because he is holding a deer by its horn. As a king (or a prince) he had the right to the first kill.

I liked the idea of the right to the first, decisive stabbing!. But this could also mean that A is helping H with the first strike, because both weapons have the same position. *Or* that they actually will make it at the same time (like the good and old 'twin souls' they were haha).
Come live forever with me, or transpire / a flame alone on a funeral pire / We'll build an empire if we so desire, travel the world, and set it on fire.
Top

I don't think it's either one. Not sure why Waldemar thinks so.* This is a case of "looking for famous people in every image..."

Now, one can make a pretty decent case that the lion-hunt mosaic has Alexander in petasos (hat) on the left, and Krateros running up to save him on the right, based on the reference to a famous sculpture commissioned by Krateros's son after his death. But this mosaic? There's no reason at all to assume either of these figures are anybody we can name.

Jeanne Reames wrote:I don't think it's either one. Not sure why Waldemar thinks so.* This is a case of "looking for famous people in every image..."

Now, one can make a pretty decent case that the lion-hunt mosaic has Alexander in petasos (hat) on the left, and Krateros running up to save him on the right, based on the reference to a famous sculpture commissioned by Krateros's son after his death. But this mosaic? There's no reason at all to assume either of these figures are anybody we can name.

(*He also has now argued the Alexander Sarcophagus doesn't depict Issos, but another battle, and I disagree on that assignment, as well. I still find Issos the most likely choice.)

Whenever I come across Alexander's pretended likenesses, they do give me headaches. Any Apollo is always "Alexander". But some indeed give one food for thought.

This mosaic is interesting, because the petasos is also there (flying away, which gives me goose pimples everytime I see this ultra "modern" artistic subtlety).
Well -- both mosaics were found in Pella archaeological site. The young man in both mosaics wear (or at least one was wearing it before the thing flew away) petasos. Of one of them, as you said, a good case could be brought on. So why not the other hatted figure as well? It could be a jolly coincidence, ok, but in both mosaics only one figure wears the hat. Because probably Alexander was seen wearing it often (is it written somewhere?), so it was like a brand when he was not wearing battle stuff. That hat very very probably links to Alexander then.

But what calls my attention there is the double ax, really. I don't have the time (or the resources) to go after it, but I'd like to check for double ax in hunts in Northern Greece. Or in mainland Greece at least. To check if that was a common hunt weapon. I think it too heavy for hunts... But these are conjectures.
Things is: the double ax is Hephaistos' attribute -- a long, doubled-headed ax, as they say. And that other guy had a very similar rooted name as of the god.

Ήφαιστος , the god
Ἡφαιστίων , the general
Ήφαιστeίoν, the temple in Athens (here not sure how they speel it in Attic)

I have wee notions of linguistics/etimology, I know roots are as weird as they go. A word can be so similar, but if you go checking the root, it is something else. Specially when Hephaestion's name has a 'w', and not an 'o'.

I found something about the god's name and the temple's:

"The question of the origin of the god [Hephaistos] is destined to remain largely open because the evidence that he was present in the pantheon of the Mycenaean age is based solely on a tablet from Knossos dated to the fourteenth century B.C.E. This mentions the word a-pa-i-ti-jo which, it has been proposed, may correspond to Hephaistos or Hephaistion , that is “sacred to Hephaistos”. (M. Barbanera, 2013)

A second thing: Γνῶσις. If we read Γνῶσις as the obvious "knowledge", wouldn't it be nice to think that it means: "Knowledge made me"? Like: made as per actual knowledge of people involved? Now, that'd be terrific!!

It'd be grand to have a real portrait of Alexander and Hephaistion, or at least the intention would be there anyway. *Aaand* from their birthplace and from their era wow!
But well, who knows...

Come live forever with me, or transpire / a flame alone on a funeral pire / We'll build an empire if we so desire, travel the world, and set it on fire.
Top

We find it's representation in Thracian tomb art, et al. So there is no reason to connect the axe to Hephaistos to Hephaistion.

Also, Hephaistos is almost certainly a pre-Greek deity connected to Attic-Ionic populations with strong pre-Greek roots, such as Attica. Lemnos was the center of ancient cult to Hephaistos, but we find other cult in areas around Delphi, etc. This has all been part of my onomastic study of Hephais-based names. There is virtually nothing to connect him to the Mycenaeans and quite a LOT to connect him to pre-Greek populations.

The petasos is a generic hat which we find frequently on pottery in the Greek south. The "kausia" was a cap specifically connected to Macedonia, but not the petasos. So again, there's no reason to assume a guy wearing a petasos is Alexander. The argument about the sorta-anastole is more on-target, but I'm still not certain.

Last, the two mosaics, while dating roughly to the same time frame, were found in different houses, and only the deer hunt was signed. I don't see strong evidence that the same artist created both. The Deer Hunt has a very complex border, while the Lion Hunt does not.

So I remain unconvinced that the deer hunt is meant to be Alexander and Hephaistion, even while the lion hunt very well may be an echo of the Alexander-Krateros sculpture, which we know existed to commemorate an historical event.
----
Dr. Jeanne Reames
Director, Ancient Mediterranean Studies
Graduate Studies Chair
University of Nebraska, Omaha
287 ASH; 6001 Dodge Street
Omaha NE 68182
http://jeannereames.net/cv.html
Top

Jeanne Reames wrote: ↑Sat Mar 10, 2018 6:14 am The double-bladed axe is not an association of Hephaistos. Hephaistos's symbols are hammer and tongs, and a particular cap, sometimes a donkey. He's not shown with the double-bladed axe, which is specifically Minoan. But also THRACIAN. And that's a lot closer to home.

We find it's representation in Thracian tomb art, et al. So there is no reason to connect the axe to Hephaistos to Hephaistion.

Hi
The ax is found in Hephaistos' hand when he's in his infamous job as Zeus' midwife in the birth of Athena. Like this :

http://www.theoi.com/Gallery/K8.14.html
And in many other representations, different painting styles.

I have just found out that the use of the double-ax thing may have been cerimonial, not really practical. So "a hunt with an axe?" seems not to fit. If it was exclusively ceremonial, one more reason to state the probable relation between the man with the ax and a deity.

And I was thinking: the flying petasos --- I wonder if the ancient Hellenes used to do just like we Westerners do today: remove any headgear in the presence of a deity... That'd be a thrilling explanation for the petasos flying away from that other figure's head, more charming than the obvious "heat of the hunt".

And yes, the petasos is more southern, but you know, that kausia is good for colder lands. For the southern sun, and day heat, and for deserts and dried up lands, a wide, flat hat would be the most intelligent choice. So one might think that Alexander left his kausia behind (along with so many things, yes?), and addopted the wonderfully adequate Oedipus' styled hat. My my, weird thing about Oedipus now, though... lol
Come live forever with me, or transpire / a flame alone on a funeral pire / We'll build an empire if we so desire, travel the world, and set it on fire.
Top
Post Reply
14 posts • Page 1 of 1